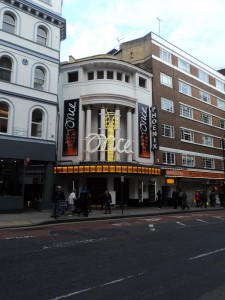 What at first was supposed to be a trip to London to see the MadTrust’s West End Eurovision (Blog up soon!) turned out to be so much better! Having travelled up earlier than I thought I was it meant we had some time to kill before heading over to the Dominon Theatre at 11.30pm. What better way to spend it than to see another show! Our choices were Rock of Ages, We Will Rock You, or Once the Musical so we decided to go around and see what seats were available and on top of that the prices.  Our winner was, the newest musical in the West End, ‘Once.’
Showing at the Phoenix theatre, and was the second time going to this particular theatre having seen Willy Russell’s ‘Blood Brothers’ in the past, its one of the small theatre and we got our ticket on the day as I said before.  We were seated in the stalls Row O seats 4 and 5, that were priced at £32.50 with now booking fee (yay) and our view was very good, and non disruptive from those in front of us! So don’t feel you need to be so close to the stage and you need the top priced tickets to see this production!
‘Once the Musical’ is based on the 2006 musical film starring Glen Hansard, and Marketa Irglova, The story follows a Guy, a Dublin Guitarists/Singer-songwriter busker who makes a living by fixing Vacuum cleaners at his Dad’s Hoover Repair Shop.  Then there is a Girl who is Czech who plays piano when she can, and does odd jobs by day, looking after her mother and daughter by night. Guy meets Girl, and they hit it off quickly, they get to know each other as the Girl helps the Guy to create a demo disc of his music which he can hopefully land a music contract.  During the same several day period, the Guy and Girl work through their past loves, and reveal their budding love for one another, through their music.  However their love is something that cannot be.
I LOVED the film, and the music created by Glen and Marketa are so beautiful, I was really excited about hearing that it was coming to the West End after a lot of success on Broadway in the states.  I wasn’t disappointed. The story on stage is just as powerful if not stronger than the story in the film, you are instantly drawn and brought into it by the performers and get lost in the love that the Guy and Girl share and want to scream at them for the stubbornness of them for not pursuing their love, but yet you understand why they can’t. That is what makes this story so good! All throughout the performance, the music is played by the performers, no orchestra, no backing track, the instruments are there with the actors, and played right in front of you during the songs and singing.  Enda Walsh the playwright of this production talks about this approach in the program:
“I always wanted the actors to be the musicians – to present them honestly and allow the music to be central to their storytelling…I was confident that I could tell the love story but the other story – of peoples potential – of our ability to create things out of nothing – that also needed to be seen and told…it’s only people up there with guitars and other instruments telling and singing their way through an everyday love story – but without pretention and shot from the heart-it’s become the sweetest strongest thing – it is true ensemble playing. it belongs on stage.”
Now on to the Staging. 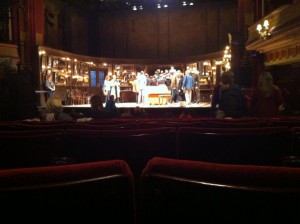 The staging design in this production is based around a traditional Irish pub, and never changes throughout, on the walls which you would expect to see many memorabilia, and photos of Irishmen, and country side are all mirrors, with a huge one in the centre of the walls. Created by Bob Crowley the New York Times have described it as:
“Bob Crowley’s single set, given multifarious life by Natasha Katz’s expert lighting, suggests the kind of pub where people come to lose themselves in song as well as drink, and the audience is invited to join an improvised pre-show hootenanny on the stage.”
Yes you get to go onto the stage as not only is it a bar in the production, but a bar to the audience and believe me if you love the theatre and to perform, you wont believe the amazing thrill it was to actually stand on a west end stage! to look out into the audience and see what the performers see it just gave me goose bumps and took a lot not to break out into song myself just to see what that felt, but I opted for a drink instead, but it was a nice change and experience that just added that little bit extra!
With being a one set performance, it really does allow you to be lost in the story, and focus more on what you are watching then the multiple scene changes one would get in most West End Musicals (not to say that’s not a bad thing) but with a story like Once that itself has such a powerful love story it was well suited.  The Mirrors also allowed you to see scenes in different perspectives in certain numbers and Bob Crowley describes:
“IF you look in the mirrors, you can see part of a face or part of a hand playing a guitar, they fracture the space, they fracture events. ‘Once’ is a modern fairy tale in lots of ways.  It’s odd and eccentric and told at a bit of an angle, and that’s what those mirrors are part of.”
Now with not many set changes it is easy to focus on those who are performance, and the actors/musicians did not disappoint. The cast was as follows: *in brackets are the instruments they played
Guy-Declan Bennett (Piano/Guitar)
Girl – Zrinka Cvitesie (Piano)
Baruska – Valda Aviks (Accordian)
Svec – u/s Robbie White (Guitar, Banjo, Mandolin, Drums, Cojon)
Billy -Aidan Kelly (Guitar, Cojon, Bodhran)
Eamon – Gareth O’Connor (Mandolin)
Da – Micheal O’Connor (Mandolin)
Ex Girlfriend – u/s Christina Tedders (Violin)
Andre – Jos Slovick (Guitar, Uke, Bass, Conjon, Banjo)
Reza – Flora Spencer-Longhurst (Violin)
Bank Manager – u/s Jaime Cameron (Guitar. Cello, Mandolin)
Emcee – Gabriel Vick (Guitar, Piano, Mandolin, Harmonica, Cajon,Uke, Banjo)

Im going to first discuss the role of the Girl first or quote a quote that playwright Edna Walsh describes Girl in the production:

“The character of the Girl was suddenly a very active presence. where in the movie she was almost ephemeral – for me she became the story’s initial engine…She is the instigator of all things. she takes us through the five days – she turns around a musicians’ life but suddenly she’s falling in love with him.  for all her effervescence she’s yearning for a love she knows she can’t have. it made the movie so wonderfully bittersweet a love story unfinished – and all the more beautiful for that…I wanted the girl to transform everyone around her. the light she shines on them over the five days affects smaller narratives.”

So does Zrinka Cvitesie pull this powerful and important role of the Girl off?  the answer is yes, from the minute she walks through the centre of the audience, she takes the role of the girl exactly as Edna describes her, and she is so funny and natural that you fall in love with her! and wish she was your friend she could help you out and get your life on track! Her playing and singing is beautiful alongside the rest of the ensemble, and you can tell that they love her too.  She does Marketa proud! 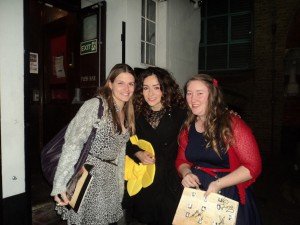 But the person she mostly helps is Guy, played by Declan Bennett, and Oh MY GOD, he has made me fall in love with the Irish accent! (kind of was a Scottish accent girl before :p) especially in song, his emotion in his songs are just spot on, every time he sang he gave me goose bumps and you just wanted him not to stop, it was just that good.  But also you can tell that he feels what Guy would have felt for Girl, their relationship on stage was so strong that you just wanted them to kiss already! Declan is such a lovely man having being able to chat at the stage door, a girl asked him how he kept his energy strong for 8 shows a week, he replied that it was the power of the story that helped bring alive his character, that the story its self is what keeps the energy on stage every time its performed because it is that powerful.  You could really tell he was loving performing the show, and you can tell from his twitter account that vocally it is quite demanding cause he is constantly showing all the different voice remedies he uses…keep it up cause to hear that voice is just WOW! 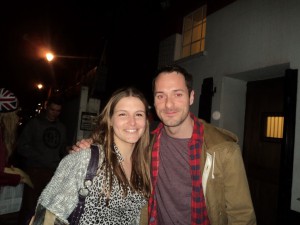 As for the rest of the ensemble, they create not just characters but a family in one.  from the beginning you just see how much fun they are having, and that its not a job but just another night out on the town, or down the pub for a few beers and create beautiful music.  it seems like a great show to be in, and I only wish I carried on my piano lessons in hope that I could be part of it….guess ill just have to go and see it again and just stand on the stage once more instead.

I highly recommend seeing Once, even if you haven’t seen the film, I hope that they bring out their own London Recording as from listening on iTunes of the Broadway one its just not the same! So go and get your tickets! I am defiantly going to try and see it again!! I bet it will be at the West End for a while!  🙂