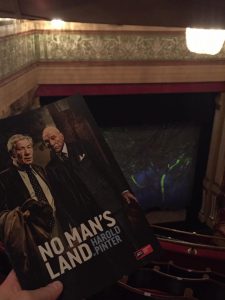 I had seen the photos all over London, and when mentioning to my best friend it would be something that I would be interesting in seeing and a little research she found it was playing close to her home in Brighton. To a great an amazing surprise she messaged me a couple of weeks after to keep Wednesday 24th August afternoon and evening free, as for an early birthday present I was being treated to see the first performances in its mini tour of England of Harold Pinter’s ‘No Man’s Land’ starring Patrick Stewart and Ian Mckellen! I could not have been happier!

So on a very hot August Wednesday I took to Brighton to meet with Natalie, and after a lovely meal on her balcony in the marina, we strolled along the seafront and sat on the pier in the sun before heading to the Theatre Royal.

This would be my second time in this Theatre, having seen Shawshank Redemption last September, where we were seated in the stalls, but tonight we were up in the Gallery, and even though the heat was defiantly rising (with free bottle of water, and fans on during the interval to try and cool it down), the view was surpringly good for being up high, and you didn’t seem to mind that at times you had to lean forward for a clearer view when those in front did the same. So if you want to save some pennies but really want to see a show, I would recommend the Gallery as you can see from the photos 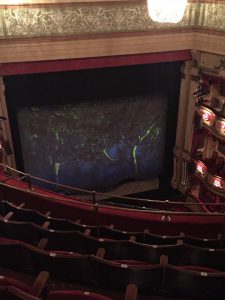 ‘No Man’s Land’ is a unique story, and I will admit that many find it difficult to read, I myself having studied Harold Pinter at University (The Birthday Party) know that he isn’t one to give a direct approach when it comes to the meaning of his stories, but really it is how the audience views it.  We were lucky enough on the night of our viewing there was a question and answers session with the cast and the director at the end of the play, and believe me it answered a lot of questions and put things into perspective when viewing, and I’m glad I did.

My interpretation of ‘No Man’s Land’ is a story of two elderly men, who managed to find each other in a pub one night , Spooner follows, Hirst back home to his wealthy estate, and although they are both worse for wear they continue to drink and tell the stories of their past, and how they know each other even after meeting for the first time that night. Hirst meets his limit and crawls away to his bedroom to rest, leaving Spooner alone and discovered by Briggs, and Foster who claim they are there for Hirst and look after him, Briggs asks many questions pestering Spooner as to why he is here, and what is going on. When Hirst makes a return to the room he starts telling them all of his dreams, and these read into his past and you begin to realise he is an unwell man, and these two young men with him are those looking after him, When Foster puts him back to bed, Briggs becomes quite theatening towards the end of Act 1 he leaves Spooner on his own in the darkness of the living room. Act 2 you then start to realise that Hirst is quite a wealthly man, and gets looked after by these two men. how they started to support him and why they are supporting him you don’t seem to get these answers, but they treat Spooner to a cooked breakfast (due to a cancellation with the bank) by Foster, they chat a while and Foster in ways opens up to him, but it is then when Hirst joins him you find him mistaken Spooner for someone he has always known and tells the tale of how he actually had an affair on Spooner’s wife. That is when both Foster and Briggs joins them again and you see that these two are looking out for him at times but also they seem to also be manipulating Hirst to they own demise, which Spooner spots and confronts them and begs Hirst to take him on as his carer instead rather than these two. After all this, Hirst merely replies “Let’s change the subject for the last time”. and after a pause worriedly asks “What have I said?” Foster explains definitively that Hirst’s statement means that Hirst will never be able to change the subject ever again. Hirst thinks back to his youth, when he mistakenly thought he saw a drowned body in a lake. Spooner now comments, “No. You are in no man’s land. Which never moves, which never changes, which never grows older, but which remains forever, icy and silent.” Hirst responds “I’ll drink to that!” and the lights fade slowly to black.

So I’m even guessing now that you are thinking what the?? but if it wasn’t for the questions and answers I wouldn’t have had this story in my mind, I mean I did have a reason behind it, and my answers were correct that Hirst is actually a sufferer of Dementia, and that Foster and Briggs see themselves as his carer, how they managed to receive this role I asked a Question to the players that night ‘Why do you think these two are helping Hirst, and is it just because or is their a reason behind it, or do they actually care?’ Foster replied that he as the character did care, there was a moment in the play where you see this, that he wanted Hirst to stop drinking, refusing to give him a drink as frustrated with him always being drunk, and although he gave him you could see the care that he had towards Hirst. Briggs however was more of the dark side and openly admitted that he mainly thought that after all this there would be his name in the will. Both of which I saw throughout, and was quite happy I seemed to note it when viewing.

I loved hearing the actors stories and I think with this play everyone goes away with there own story, or reflection to the story. I could relate at times having had a nana who suffered from the horrible disease of Dementia, and its not a nice illness to witness, but also being a carer myself I could feel for Briggs and Foster, more Foster though with the frustration of just wanting to help, and knowing whats right but the client not listening.

This play I will admit is not for everyone and I know if people who have become frustrated watching it, but that is Harold Pinter, and I will admit having not studied the playwriter I may have also been confused and irritated at what I had just seen, it was also interesting to get the views of the actors, and the directors of the play, and they take on it all. Also interesting that the director Sean Mathias did a liquid read of it before coming up with his ideas. 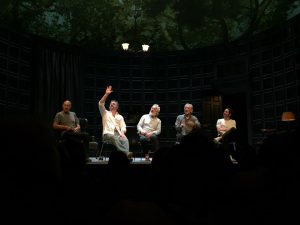 The play has a very small cast (Above is the photo of them all on stage during the Q&A with the director in the middle) but my word it is one of the best:

How can you not be excited for that line up, and believe me Patrick and Ian are that good. Both I know have been great friends for a very long time, having performed this play and Waiting for Godo on Broadway I am so glad they have brought it over and gave Britain a show. They just work so well together and so in sink its insane. They have the comic timing, and the power to take over the stage that you just watch in awe when they speak. Patrick I take my hat off as his portrayal of Hirst was lovely, although when he had drink he was confident and strong, he could also be seen as vulnerable (when he is in the bathrobe) and you sympathise with him going through this disease and not truly knowing what is going on, but yet still he seems happy. Spooner played by Ian is also a very sweet portrayal of man who just wants to help someone who he knows he can and sees he is being treated unfairly.

Damien (Game of Thrones) I was also very interested in seeing, and he was kind of my favourite as I saw a lot of him in me at times with his reflection of being a carer, and when having a chat with him at the stage door you could see how passionate he was about his character and how he was viewed. Owen (Torchwood) also the youngest of the cast and himself in awe of who he was sharing a stage with each night, was a darker side and again you could see the young manipulative lad that he was trying to be with the situation of Hirst.

Now you know I go to the stage door, but tonight was one of the best experiences I have had when it comes to being at one, there was no barrier, no body guard but just a few members of the public and the cast standing outside the theatre, and they actually stopped and chatted (except Owen who had friends in and went on the front entrance) Patrick I wanted to hug as he actually turned away some people who had photos of him as Professor X (X-men) stating that he does not sign these and will only be doing programmes, it made me smile as I knew they hadn’t seen the show at all! It was so surreal but I loved each moment as you can tell from the photo’s! Even had a quick chat wit the director who was shocked to see I wanted his autograph. 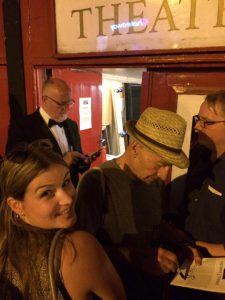 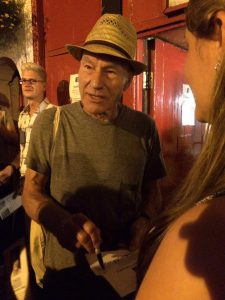 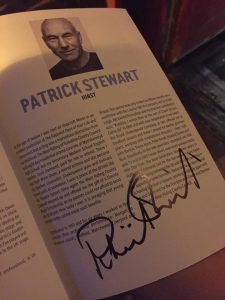 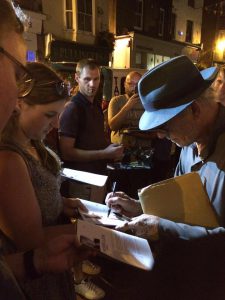 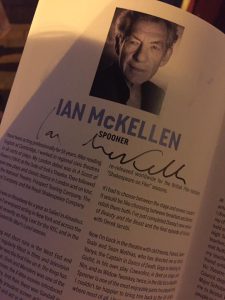 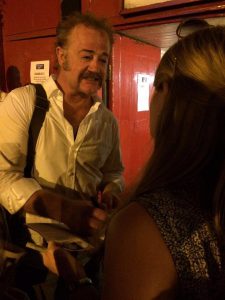 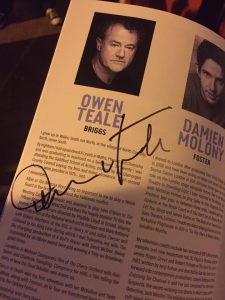 If you love the theatre, and you love plays then this is the show for you, and even if its not up your street, to see these actors live is a treat in itself, I am so thankful I got to see it before it hit the West End because I don’t it would have been the same as Brighton with a lot more restrictions at stage door to be sure! So Thank you so much Natalie for buying me tickets as it was a lovely early birthday present!