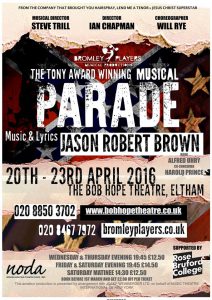 It is rare that I get the chance to blog about amateur dramatic productions, as most often than none I am usually joining the performers on the stage, but tonight I was on the other side.

when moving to Kent I had joined an amazing group West Wickham Operatic Society, and when preparing for auditioning for Legally Blonde there were new faces in the crowd who were also part of a rival theatre group the Bromley Players. When getting into conversation they told me about their next production ‘Parade’ coming up in April and how I should come along, and with luck had it I had an evening free when the boy wasn’t due back late I took the advantage of treating myself to a trip to the theatre, and I wasn’t disappointed.

‘Parade’ is a Tony winning Musical based on the true story in 1913 of Leo Frank, a Jewish factory manager who moved to Atlanta, Georgia, to work in a pencil factory, and married to a southern girl Lucille, the story tells the tale of Leo who was wrongly convicted of raping and murdering thirteen year old Mary Phagan, his employer. No one was witness to the murder, and in even with Leo having a perfect alibi, being home with his wife all night when the murder took place, but being the South, and still stuck in its bigoted Confederacy justice had to be made. This time it is a Brooklyn Jew, rather than a southern African American. Hugh Dorsey, the chief prosecutor of the murder who is wanting to be the next governor, ensures that witnesses are made through bribery, confronted and coerced into testifying in order to lead Leo to the gallows tree. Which unfortunately is where he has been sentenced to, however not before Leo’s wife Lucille persuades the governor (a lawyer in his past) to step in and helps to prove Leo’s innocence which leads him to having a replacement sentence to life imprisonment. Until the public is not happy with the change making  the lynch mob take the law into their own hands…

with a powerful story to tell I can only but congratulate Bromley Players for telling it amazingly! the chorus support the Principles with great respect and they work fluidly and effortless throughout each of the scenes, and being opening night, with just a few hiccups with the microphones, you would think they’d been doing it for a full West End Run.

The Cast for tonight: 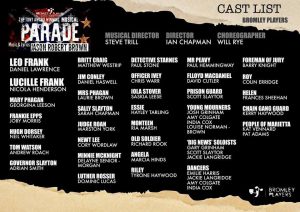 Daniel showed an outstanding performance as the accused Leo Frank, who goes from a cold OCD Brooklyn Accountant Jew, to a soft, caring, appreciated Husband and the transition and character is greatly shown to the audience, I particularly liked how he completely changed role to reflect the accusation of the factory girls as a sleazy lusting manager. I couldn’t flaunt him, as every scene you would sympathise with him wanting to scream at the Jury his innocence because you think it will help and stop the bullying, and then when there is hope you smile with him. Nicola as Lucille worked well with creating the chemistry between Lucille and Leo, a wife who was most likely arranged to be married to a man that doesn’t love her, but still she stands strong for him, and fights for what is right, and you respect her for this. Throughout you see Nicola’s emotions and how every event is affecting her, and you are so happy when she finally gets the respect and thanks from Leo she deserved even though it took to long. Their duets ‘This is Not Over’ and ‘All This Wasted Time’ were my personal favourites and their voices suited each others that gave me a lump in my throat as well as making me smile. 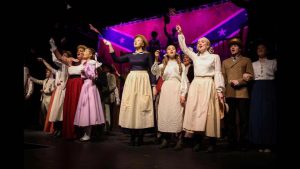 The great thing about Parade are the many characters that allow the company to have their time to show the audience what they made of, and again each showed a brilliant role each different to each other. The gossip digging, trouble making reporter Britt Craig, performed by Matthew Westrip showed excellence in his role, from the guy who just wants a story, to the lies that he has typed finally getting the better of him and regards being a part of the outcome for Leo. The baddies so to speak, of the evening Hugh Dorsey, Tom Watson and Judge Roach played by Neil Whitaker, Andrew Roach and Marston York, make the audience angry just as their roles should do, you wanted to shout at them for them to speak the truth instead of the lies they spat. Along with the story being told between the married couple the other story of the affect the murder of Mary Phagan had on the public of Marietta such as her devastated mother played by Laurie Brown, and could have been romance of Frankie Epps, Joby Morris each of whom would do ensure that Mary is avenged, but the rest of the company was strong and you could see that all they wanted was justice  and answers as to what has happened.

Other mentions are to the chain gang member Daniel Haswell, who played Jim Conley who although shows signs of guilt throughout, you couldn’t flaunt he had the audience warming to his voice, and I enjoyed listening to his songs, but yet when you understand his role you can’t help but be angry at him as well.

I am so please that I got to see this production and again it was nice to go to the theatre and not know anything about what I was going to see until it was there in front of me, and now I can’t stop listening to the songs, the director Ian Chapman can be proud of his cast who directed the musical in a beautiful way! Its a pity that it is a limited run because it is defiantly one that I would go and pay for again, and if it does go to the West End then I would consider seeing it also, but it has to be warned that it has a tough act to follow!

← “The thing about a saviour is you never know where to look. Might just be the place you saw the devil before.” Hand to God, Vaudeville Theatre, London 24.03.2016
“If We Say That We Have No Sin, We Deceive Ourselves, and There’s No Truth in Us.” Doctor Faustus, Duke of York Theatre, London 25.4.2015 →