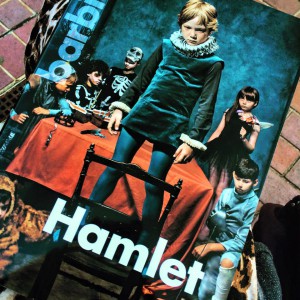 So after a few weeks, it wasn’t long before I was returning to the theatre, and this time back to my favourite city of all, London. My friend Hayleigh was able to get tickets to this production at the beginning of the year, for when she knew who was starring as the main lead the tickets would be a fast seller, she purchased 6 and I was very flattered that she had offered one ticket to me, to which I immediately excepted because there was no doubt in my mind that this production is one not to miss, and with a sell out performance I was one of the lucky ones to be going to see Benedict Cumberbatch in Shakespeare’s Hamlet. 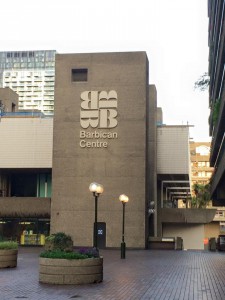 Tonight’s performance was being held at the Barbican Theatre, which I was excited to be returning back to, having only been once before seeing another Shakespeare play Troilus, and Cressida for an A Level college exam. So it had been a couple of years. I was the first to arrive at the scene being it was Hayleigh’s birthday they had managed to get the day off so was off enjoying the sights of London Prior to meeting me. As I made my way to the theatre feeling a little more free from the packed underground trains that I had just ventured on, I had my musical playlist playing on my iPhone and ironically ‘Do you hear the people sing’ from Les Miserable was selected for me to listen and 30 years ago Les Mis had started its time in London West End at the Barbican.

I waited a little while, and managed to get myself a programme to have a look through before the others appeared, and boy did they cut it fine, and just arrived before the doors closed for the nights performance. Now I had said that it had been a 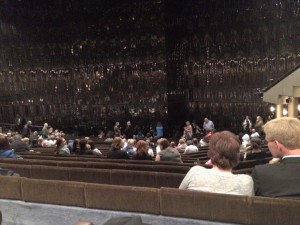 while since I have seen something here, when we viewed the performance from two sides of the stage with the play being performed in the middle of us, tonight my mouth dropped as it had been transformed back into a front view performance, and it made me realise how powerful this venue is to be able to transform in so many ways for any performance that comes its way. Our view was great, and had no complaints even with the price we paid (£60) for the tickets it was worth it The picture shows the protected curtain on the stage but what was behind it was even better, as you wouldn’t believe that when that curtain rose, behind it was a full mansion setting which I would happily live in and just so you could understand what I am saying here is a picture 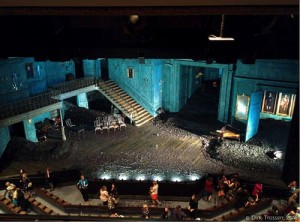 , it was stunning, and how it gets transformed in the second act with all the gravel and mud I just wonder how long it takes them to clean it all up!

Now I would find it hard to believe that there isn’t anyone who doesn’t know the story of Hamlet, as it is one of Shakespeare’s famous plays, but incase you need a reminder. Hamlet is the story of a son, who had lost his father, and who’s Uncle Claudius takes the throne and remarries his mother Gertrude (His sister in law), Hamlet disgusted at his families quick moving on from his fathers funeral discovers that guards men has been seeing a ghost along the plain. Leaving with his good friend Horatio he goes to find this ghost, to which he does and follows the ghost’s wish to follow him, we find it is the ghost of the past king, Hamlets father who tells him that he was murdered by his own brother the new king Claudius, and asks him to avenge his death. Hamlet follows his fathers wishes, but first to be sure that the ghost speaks the truth he tries to trick his uncle into confessing that he murdered the king, by pretending to go mad, and asking his good friends to put on a play that follows the story of how the King was killed (poison in the ear).  When viewing the production Hamlet closely watches and find that his Uncle reacts to the story confirming he had done the deed, Hamlet goes mad when confronted by his mother, and ends up wrongly killing Polonius (father of Laertes, and Ophelia) who was hiding behind the curtain in the room to ensure Gertrude was safe. Hamlet gets banished back to England, but he returns once he discovers that Ophelia has died (as she went mad due to her fathers death), and Laertes angry at hamlet challenges him to duel, to avenge his fathers death, Claudius agrees to this and uses this to try and get rid of Hamlet by putting poison in the wine for the end of the fight. The fight ends in misery, Gertrude drinks the poison, and through the fighting Hamlet avenges his fathers death and kills Claudius, but also through wounds of his own dies himself.

now that’s a pretty rubbish run down of the story but i’m sure you all know it, even if you have seen a version such as the Simpson’s, or Lion King.

Now we were lucky to have all performers performing tonight, and it was a big cast so I will just name the main roles:

First Ophelia, Polonius, and Laertes, seeing as they are the same family group, Jim Norton portrayal of Polonius was great, you couldn’t help but watch him and be entertained as he bought humour to the role showing the character of an elderly man but with a lot of spirit and he gave the audience smiles, and laughs as you could relate him to your much loved granddad well I could anyway. Kobna as Laertes at first I wasn’t persuaded at his acting ability, I found his first speech to be a bit bland and sounded as if he was just saying the words rather than feeling them which was disappointing cause it was supposed to show the love he has for his sister, however in Act 2 he seemed to get better, and expressed a lot more when he was upset on Ophelia’s death. Sian also again I felt in he beginning of Act 1 a very standard performance, but when she portrayed the ‘mad’ Ophelia she was excellent, and gave it her all to make the audience understand how much the killing of her father affected her.

Ciaran Hinds as Claudius was brilliant, and embarrassingly throughout act one he irritated me not because of his acting cause that was first class but because I hadn’t had a chance to look through the programme fully I wasn’t sure who the rest of the cast were, and when I was watching him I kept thinking ‘I know him from somewhere…’ but I just couldn’t put my finger on it, it was finally when the interval came and I asked that Dave (Hayleigh’s boyfriend) finally put my mind to rest, I had seen him in Game of Thrones, and Woman in Black, and I loved him in both of those so was very happy that I got to see him perform live. Ciaran Hinds as Gertrude again was a brilliant performance and you could really see her emotions show with the character of a mother who is just trying to do what is right, and how she affected she is by all the drama, although she would try and comfort Hamlet as much as she could, you couldn’t help but feel that its her that needs the hug.

Horatio played by Leo Bill, portrayed as a back packer travelling to see his good friend Hamlet, was good, but I felt that he could have done a lot more with the role to make you remember him more, as I felt he just blended in with the chorus.

And then there was Hamlet, played by Benedict Cumberbatch, wow just wow is all I can say, I loved his take on such an iconic role. his powerful soliloquies, with each one showed a different range of emotions that made you feel that he meant every word he spoke, and you could only focus on him (and not because the amazing stage lighting zoomed on him while the chorus moved in slow motion), I loved his intake on how Hamlet portrayed his going mad, but turning back into a little child and playing with fully grown children toys it was also brought an entertaining side to the character. I was so happy I got to see him perform, and I was gutted to learn that he advised many people not to come to the stage door cause he would most likely not come out, so we didn’t risk it at the end of the play.

I want to thank Hayleigh for offering me a chance to go and see this amazing production, and now that its finished it was a rare one to see and ‘glad I have its programme as part of my collection.