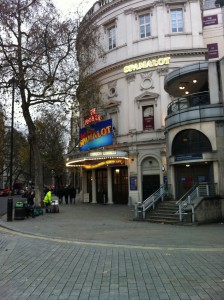 So having just seen Rock of Ages for the third time, I guess it was time to go and see Spamalot for the third time also! Not only because it was a special of 2 for 1 tickets on a Tuesday, but because The Warrick Davis was playing for only a limited time only Patsy! Then after I bought the tickets I found out that it would also be part of the last weeks of Jon Robyn’s run as Sir Galahad! I was so thankful that he was playing that night, and I got a cuddle later on!

So again im not going to go through the whole story line of the show and the venue that can be found on my first review Here, however with the deal being 2 for one myself and my mate Jessica had central stall tickets for G14 and 15, they had a great view, however those that sit in front could get in the way and I was finding myself moving from side to side to get a look in, in parts of the show! but for 29.75 each I wasn’t complaining (I think the deal is going on still now! So go buy!)

The cast tonight was brilliant no understudies whatsoever!

King Arthur – Les Dennis
Lady of the Lake- Bonnie Langford
Patsy – Warrick Davis
Sir Bedevere – Robin Armstrong
Sir Robin – Rob Delaney
Prince Herbert – Adam Ellis
Sir Lancelot – Kit Orton
Sir Galahad – Jon Robyns
I suppose the first person I should talk about who was new to the cast is THE Warrick Davis, Oh my god!! he was made for the role! he was brilliant!! he had the timing, the moves and amazingly the voice! (sings always look on the bright side of life!) just everything you could want for Patsy, and what was brilliant is they just laughed with him with his height, the bit with the shrubbery, where he was struggling to lift it, and in the end, he just dropped it pulled a handle out of it and then just rolled it off like a carry on suitcase! LOVED IT! He looked like he was enjoying himself so much up there, and loving working with the cast, he even made fun of Les when he had to sing his we are know longer the knights who say Ni! “Even I have to admit sir…that was embarrassing!” Having known Warrick as a massive film star mainly Star Wars, and for me Harry Potter, it was such a blast to get to meet him at the end at the stage door and get a photo. Now I have met two professors in the wizard world! Professor Umbridge, and now Professor Flitwick!! 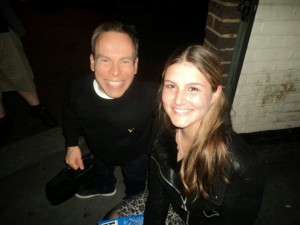 Then there was the new cast Bonnie Langford, a west end star, and returning to play the Lady of the Lake, she was as she is a WEST END STAR, she really knows how to bring a character to life, and not just through her voice but her facial expressions! Her What ever happened to my Part was such a highlight, as she took centre stage! Les Dennis, totally forgot how good his voice was, having forgotten that I have seen him before perform in Legally Blonde the musical at the Mayflower Theatre! He was a great enjoyment as King, and although his Knights who say Ni was ‘Embarrassing’ its great to see him also getting in with the cast and just laughing with themselves and the audience. 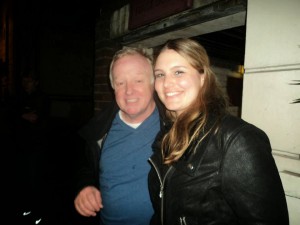 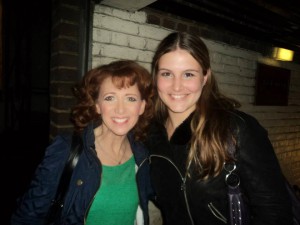 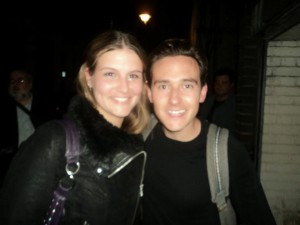 I will admit that I missed Graham McDuff at the performance, as I will always loved his Lancelot, but Kit Orton was very funny also, and not to shappy in his little Lancelot pants (you will have to see the show for that) but the other group, Robin, and Rob, and Adam all the great character they were the 2nd time around, and even got a quick photo with Adam at the stage door, but like I said I am so pleased that every time I have been to see the show Jon Robyn’s has played Galahad! He is a lovely guy, and a terrific actor, and im not sure if this is bad or good, but to me its amazing! Because of the fact that he actually remembers me and is happy to give me two cuddles to get a nice photo! 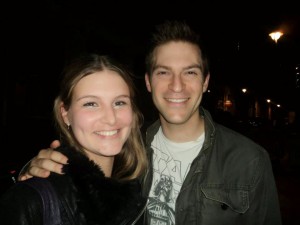 Warrick, Kit, Bonnie, Les, and Jon have all now ended there run with Spamalot, at the moment Carley Stenson from Hollyoaks is playing the Lady of the Lake, and the others i’m not too sure, however Dick and Dom are now announced to be playing King Arthur, and Patsy during the Christmas term.

But one thing is for sure, I am off to London on the 14th of December to go and see Jon Robyns, and Kit Orton in Dicken’s Abridged, so hopefully another photo and cuddle is on the cards!

Although I myself am not sure if I will go and see the show again, because the memories I have I’m not sure I want to replace, but all the same Spamalot is such a great show! So go and get tickets and be prepared to laugh out loud!